14/04/2018 – a day that is engraved in my memory forever – together with the faces I had passed, the roads and villages I had crossed and the many emotions I had gone through.

That morning we woke up very early to show up at the meeting point in Pho Doan; my eyes were tired from fatigue and lack of sleep. We had been travelling on motorbikes from Hanoi the day before. By the time we finished dinner, we had barely 3 hours of sleep. I threw myself onto the grass at the starting line, waiting with a thought circling in my head: “Can I finish the 70km distance?”

The signal was given, and hundreds of people moved forward into the night. I tried to squeeze in and caught up with the guys in front so that I could leverage on their strong headlights for better visibility. (My light was tiny and lighted up like a firefly.)

There were 7-8 people in the first group. No one said a word. They just kept going. A few kilometres later when we faced the highest peak (which I later learned was called “The Beast”), there were only Quang Nguyen, Guillaume Degoulet from France and myself. Guillaume Degoulet quickly overtook us and tackled the hill head on. Quang Nguyen followed right after. I didn’t want to be left behind, mostly because I kept tripping every time I lost sight of their lights. I wondered if they were feeling tired yet. My breaths were getting heavier and heavier. I started counting backwards on the elevation gain. I had seen the elevation map before but had no clue it was going to be so tough! The three of us stuck close together and got to the peak of The Beast at dawn. We looked back and behind us was a breath-taking view – a blanket of clouds cut across the mountain, and lights like fireflies sparkling in the distance that must have been from the second group of runners.

From there, the race really started. Quang and Guillaume rushed down the hills. I lost them just after a few minutes. Not forgetting what my “coach/brother” Trong told me before the race, I stayed calm, paced myself and intended to do so for at least the first half of the distance. I kept the third position.

At CP1 (12km), I was informed by the volunteers that the first two have left for at least 1km. They even joked with me: “Use the shortcut!” I shook my head with a smile, quickly ate the refreshing slice of watermelon and ran off. It was not too long before I ran into a local guy who kindly offered: “Want me to give you a ride? No one would see!” Again, I shook my head: “Thank you very much but it should be fair play!” He was so stunned by my refusal that I couldn’t help laughing out loud. I ran away thinking: “If only I could ☹”

And the kindness continued along the course. The locals are so friendly and hospitable. When stopping by a local hut to ask for some water to clean my feet, the owner told me: “Come have some tea before you go!” Had I not been dreaming to finish in the top 3, I would have stopped to have a chat with him. After all, that’s the fun of running. Every race is an opportunity to discover new landscape, meet new people, and experience new cultures.

At CP2 (23km), I was informed that Quang was 10 minutes ahead of me while Guillaume 7. Also, I was shocked to see Trung Nguyen running behind. I had thought he would be far behind. I quickly ran ahead.

I kept running and running but still could not see the top 2 guys anywhere. I thought: Maybe I could be happy with a 3rd place. Hill after hill, I slowly ran/walked uphill and rushed downhill, crossing one green field after another. Near CP 4 (38km), Guillaume suddenly appeared. I was so excited and sped up to catch him at CP4. Here we said hello and exchanged some pleasantries over watermelons and sips of water. I smiled happily at him before running off. From there, I started to pick up my pace because I knew Guillaume was just stepping behind.

The route turned into long and winding uphill cement roads. The sun was out. The scorching heat from both the sun and the cement made it unbearable. There was a point when I screamed out “Such terrible hills!” Nonetheless, I knew I couldn’t afford to take a break. Guillaume would be right behind, so I just pushed through. By the time the road turned downhill, CP5 appeared in the distance.

From there on, the uphill was less challenging, so I decided to speed up. While the other runners ran downhill carefully, I raced through all of them, constantly asking to be given way: “Excuse me brother, sister, sorry, thank you, …”. I ran into a foreigner at the next CP. He was from the organizers. He told me he had just seen Quang Nguyen 10 minutes ago. He pointed me to the green picturesque paddy fields and almost as a reflex, I posed for a photo. We bade goodbye and I took off. I couldn’t remember the exact kilometre mark, but I caught up with Quang Nguyen just minutes later. I had no idea how I was able to close the 10-minute gap that quickly. Not wanting to lose my good momentum, I rushed past. I still couldn’t believe it! Did I just pass both Guillaume and Quang? Was I seriously leading? I kept running in disbelief. I would never have imagined that I would be in the leading place. Feeling excited and a growing sense of pressure, I decided to give it all so that I would not let anyone catch up with me again. The 16 kilometres ahead might be the most difficult journey.

The rolling hills shaved off my remaining energy, especially the highest one named “The Killer” at Km52. When we started, I was able to walk up “The Beast”, my legs were still fresh then. “The Killer”, however, really knocked me down. I was struggling to pull myself upward, step by step, almost in a manner of crawling. A moment like this truly reminds you of how good you got; don’t take things for granted!

This was not the first time I have run in the heat. In preparing for the trail races, the runners of Danang Runners and I often trained in the middle of the day on the hills of Son Tra to improve our stamina. Having said that, this was the first time I experienced the heat of Thanh Hoa – not the kind of sun that burns your skin, rather the kind of humid heat that makes you feel suffocated. If you ask me, I would say the Vietnam Jungle Marathon deserves to be named one of the most gruelling trail races in Vietnam. The hills and the heat were never-ending and merciless, draining all the energy of any runner regardless of their fitness.

A few kilometres from the finish line, I intentionally ran more slowly with the thought that I had kept a safe distance with the second runner. Then, out of nowhere, Trung Nguyen appeared right behind my back. I could see him from the corner of my eye. Oh no! I have lost all my leading advantage.

“I can’t slow down. I would have wasted all of my efforts thus far.” I thought. So I ran and ran. Not with the pace I had been having. I was literally sprinting. Running past some photographers, I felt relief, thinking “This must be it! I’m here!”, I yelled out:

“Sorry brothers, how much further?”

“What??!! Are you serious?” Again, I was in disbelief as my GPS watch had already shown 67km which was exactly how long the organizers indicated the race to be”

“Fine. You want to hear the truth?” The photographer gave me a cheeky smile.

Disheartened, I continued running. There must have been something wrong with my GPS watch. I had never wanted to see a finish line more than this. I would normally finish 2km in a blink. Why was it taking so long?

Not knowing how far behind Trung Nguyen was, I gave it my all, whatever was possibly left of me. I ran up and down the terrain as fast as possible, over and across everything. Creeks. Rocks. Hills. (Later that day, when I checked my watch again, I realized I was sprinting at pace 4!) I could hardly breathe anymore. I felt my core heating up and it was getting very uncomfortable. But I could not stop!

The moment I heard the crowds and the signature green flags of Vietnam Jungle Marathon, I was exploding with happiness. I sprinted across the finish line with the loud welcome of the MC and the supporters. My efforts had paid off. I was beaming with pride for having finished first at one of the biggest trail races in Vietnam! That said, I knew just so well that the result had been partly because the strong competitors of 2017 could not join this year. Not to mention Trung Nguyen almost passed me at the end. So, I told myself I need to keep trying harder!

Some people asked me what I had eaten at the checkpoints. They were shocked when hearing me say “just the refreshing watermelons, 2 pieces of energy gel during what would have been breakfast and lunchtime, and some water and salt sticks.” “Where do you find the energy”? I had no idea! Was it the scenery, the people, or the adrenaline of the race that energized me so much? I guess I would never find out. The gentleman from the organizers that helped to take my photo had commented then that I still seemed very strong. Little did he know that I almost collapsed at the finish line. I couldn’t stand straight anymore!

The fatigue could not rob me of the happiness that quickly consumed me. I was so proud to have been able to represent Danang Runners at the race. I hope to let more people know about my hometown and that Danang Runners would soon grow to be as strong as the other running groups in Vietnam.

I would also like to express my gratitude to the organizers of the race. They have done such a fantastic job organizing this beautiful race, bringing people from all corners of Vietnam and abroad here. Lastly, to all participants, you are the winners!

And for me, this victory is just a beginning. I still have a long journey ahead training for my most important race this year – the Vietnam Mountain Marathon 100. 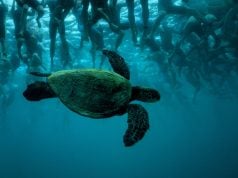